Domestic violence (also referred to as Intimate Partner Violence) is the use of power and control within an intimate partner relationship that threatens a person’s well-being. The abuse can be physical, sexual, emotional, and financial. It can happen to anyone of any race, age, sexual orientation, religion, gender, economic background, education, and abilities. It can happen to couples who are married, living together, dating, or sexual partners (ICADV).

Abuse happens in relationships where one partner tries to have power and control of another partner. In order to get and keep that power and control over their partner, the abusive partner uses multiple tactics and manipulation. This can be seen on the Power and Control Wheel. There is never the same amount of violence used in an abusive relationship by each partner, which means that violence and control is always maintained by one person in the relationship.
​
People outside of the relationship may become aware of the abuse when there is a physical or sexual assault. These assaults may occur on a limited basis, but the tactics and manipulation used daily along with the assaults can cause victims to fear that more abuse will take place in the future. A pattern of abuse is often established. At times, things may seem calm for a while but often the assaults and abuse repeat and intensify, which in turn becomes more dangerous to the victims, their family and friends, and children. It can even turn lethal. 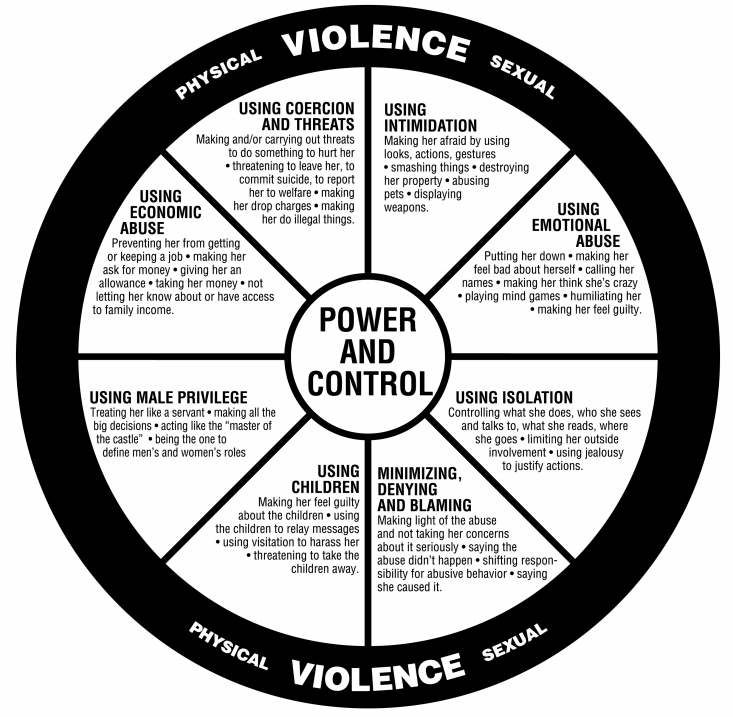 Data from CDC’s National Intimate Partner and Sexual Violence Survey (NISVS) indicate:
​
Although the personal consequences of IPV are devastating, there are also many costs to society. The lifetime economic cost associated with medical services for IPV-related injuries, lost productivity from paid work, criminal justice and other costs, was $3.6 trillion. The cost of IPV over a victim’s lifetime was $103,767 for women and $23,414 for men.

1 in 3 women and 1 in 4 men have experienced some form of physical violence by an intimate partner. This includes a range of behaviors (e.g. slapping, shoving, pushing) and in some cases might not be considered "domestic violence."

On a typical day, there are more than 20,000 phone calls placed to domestic violence hotlines nationwide.

The presence of a gun in a domestic violence situation increases the risk of homicide by 500%.

72% of all murder-suicides involve an intimate partner; 94% of the victims of these murder suicides are female.

1 in 15 children are exposed to intimate partner violence each year, and 90% of these children are eyewitnesses to this violence.

Victims of intimate partner violence lose a total of 8.0 million days of paid work each year.

Having children with an abusive partner can have a big impact on their lives and safety. Children often witness abuse and usually know when there is domestic violence going on in the home. Sometimes they are even victims of abuse themselves. Domestic violence in the home often leads to higher chances of kids being victims of physical and sexual abuse. When a child witnesses domestic violence in the home, it can impact their behavioral, mental, and physical health and their future. It’s vital for children to be part of your safety plan if violence occurs in the home. Consider making a safety plan for your kids and reviewing it with them often.​

In domestic violence situations, the family pet(s) may be the only source of comfort for the victims. The amount of dependency and attachment for the pet is often used against a victim as means of control by the abuser. Basic needs can be forgotten, overlooked, and neglected during violent incidents, and can be used as leverage to force compliance from the victim by the abuser. Pets can also become targets of abuse themselves. Some victims have no choice but to only grab what they can to get away immediately, leaving behind their pets. Leaving a pet can be very traumatizing. Locally, there are humane societies, kennels, and veterinarian offices that may be able to assist in these types of situations.

Anyone can be a victim of domestic violence, but according to NCADV, “People with disabilities have a higher lifetime prevalence of experiencing abuse than people without disabilities.” People with disabilities that are being abused could experience numerous and different forms of abuse like withholding medications, physically harming their service animals, denying necessary physical accommodations, withholding or denying assistive devices, and many other ways as well.

LQBTQ victims experience the same or in some instances higher rates as heterosexual couples. There are some unique barriers and ways abusers control their victims in an LGBTQ relationship, such as, but not limited to: discrimination (ineffective assistance) from resources, threats to “out” someone’s orientation, or using offensive pronouns. Crisis Connection advocates are dedicated to helping all victims of domestic violence or sexual assault, and we believe that every person is worthy of being treated with dignity and respect, and we integrate these beliefs into our services for everyone.

Status as an immigrant can make people more vulnerable to domestic violence because of barriers such as: language, isolation from friends or family, and strict immigration law making. Despite immigration status, no one deserves to be abused and abuse is illegal. Victims that are immigrants are less likely to seek assistance from law enforcement or other agencies for fear of being deported or even losing their children. Crisis Connection can help connect you to resources that assist in providing services to immigrant victims of domestic violence.

While not all abusive people will display the same warning signs of abuse, it is important to reach out for support if you think any of these signs are involved in your relationship. Sometimes the abuser will try to explain their behaviors as signs of love and concern, however as time continues these behaviors can become more sever and even dangerous.

Many abusers use a multitude of different tactics to control and manipulate victim, a few of them have been listed below:

Leaving an abusive relationship can be very complicated and dangerous for a victim. Many times, people will blame the victim for returning to or staying with the abusive partner. It’s important to understand that leaving is often the most dangerous time for a victim and takes careful planning. When victims leave, the abuser loses their power and control and can retaliate in very dangerous ways towards the victims and their supports.

Women are 70 times more likely to be killed in the weeks after leaving their abusive partner than at any other time during the relationship. This is why it is important to be working with an advocate who can help you plan for your safety.

Reasons why victims stay or return: